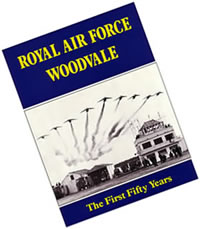 The story of this coastal airfield built in 1941 for the defence of Merseyside. The base is probably the only ‘utility’ type RAF airfield still operational today with the RAF.

Woodvale acted as a fighter base for squadrons resting from the heat of battle in the south of England whilst they defended Merseyside, rested and re-equipped and returned to the fight further south.

There were also a large number of support units working with all three services, calibrating anti-aircraft guns and their radars and towing targets for the Royal Navy

Towards the end of WWII Woodvale was transferred to the RN and after a period of uncertainty Woodvale reopened in 1946 with No 611 ( West Lancashire ) Squadron reforming there.

Meteor jets arrived in 1950 and remained until 1971 when No 5 CAACU disbanded.  Remaining a training base since 1951, Woodvale is now home to 611 (West Lancashire) Squadron, RAuxAF; plus Manchester and Salford Universities Air Squadron; Liverpool University Air Squadron, No 10 Air Experience Flight flying the Grob Tutor aircraft and No 611 (Woodvale) Squadron Air Training Corps.  There are also many civilian aircraft based here.