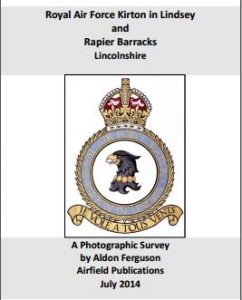 A 2014 photographic survey of this RAF expansion period airfield which housed all three RAF Eagle Squadrons, many other famous fighter squadrons and later played an important training role.

The base was handed over to the Army in 1965 and became the home of the Bofors, and later Rapier anti-aircraft missile system for 39 years.  It was renamed Rapier Barracks, Royal Artillery.

Kirton was handed back to the RAF in 2004 and remained in use until 2012 when the last unit vacated and the station closed down.  It was sold on the open market in 2014.

This survey illustrates each building, many internally, together with a detailed narrative describing their use, construction, age and modification.

In addition there are several plans and maps, a full building schedule, list of all units operating from here, history, related graves and historical photographs.

There are a limited number of high quality printed copies available at £27.50 each or on DVD at £12.00 each including packing and mail.