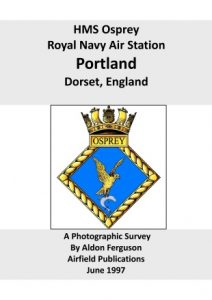 A photographic record of the last days of this base being in service taken in June 1997 whilst fully operational.

It closed on 31 March 1999 and has subsequently been redeveloped as the Weymouth and Portland National Sailing Academy and hosted the 2012 UK Olympic Games.

Located adjacent to the Royal Navy base at Portland harbour, operated float planes during WWI but was developed as a helicopter base in 1946. It then became ‘home’ to many ship’s flights with new hangars and accommodation housed a large number of squadrons and operational and training flights using Wasp, Whirlwind, Wessex, Sea King and Lynx types plus pilotless target drones.

The document lists all units and their equipment, a short history and full photographic record of all buildings and the airfield including many aerial photos.

The book contains 179 pages, virtually all photos in colour

Only available on DVD in pdf format.